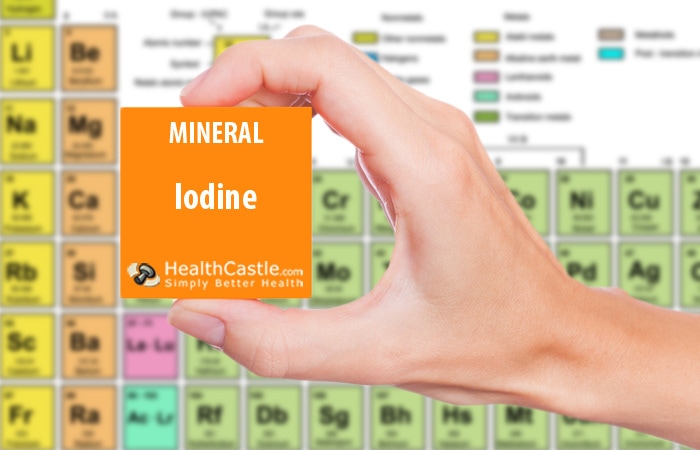 Iodine is a trace mineral that the body needs to make thyroid hormones, which are essential for normal growth and development. Most of the world’s iodine is found in the ocean, where it is concentrated by sea life, especially seaweed.

The Dietary Reference Intakes (DRI) for iodine are shown below:

What ​Does ​Iodine Do?

Iodine is essential for the production of thyroid hormones. Thyroid hormones regulate many important biochemical reactions in the body, including protein synthesis and enzymatic activity, and are critical for metabolic activity. They are also required for proper skeletal and central nervous system development in fetuses and infants.

An iodine deficiency will cause the thyroid gland to become enlarged (called goiter), reflecting the body’s attempt to trap more iodine from the circulation and produce thyroid hormones. Goiter is more common in certain areas of the world where foods with iodine are lacking in the diet and where there are low levels of selenium in the soil (selenium is directly involved with certain functions of the thyroid gland).

Iodine deficiency may eventually lead to hypothyroidism, which can cause fatigue, weight gain, weakness, and/or depression. Interestingly, iodine deficiency can also cause hyperthyroidism, a condition characterized by weight loss, rapid heart beat, and fluctuations in appetite.

Severe iodine deficiency during pregnancy or infancy causes a condition called cretinism. This condition is characterized by hypothyroidism and will lead to malfunctioning of the thyroid gland and/or severe intellectual disability, deafness, stunted physical growth, and spasticity of muscles. If discovered in its initial stages, cretinism can be corrected with iodine supplementation.

Iodized salt, seafood, iodine-fortified bread and dairy products are all good sources of iodine. Iodine is also present in human breast milk and infant formulas. Fruits and vegetables contain iodine, but the amount varies depending on the iodine content of the soil.

In the United States: The % daily value gives you an idea of how much iodine is in the food you eat. The daily value for iodine is 150 mcg, which is the same as the DRI for adults. The number you see on the Nutrition Facts label is a percentage calculated by dividing the amount of iodine in one serving of the food by the DV. Using an example from the above table, 3 oz of shrimp containing 35 mcg of iodine would have 23% of the DV for iodine. the FDA does not require food labels to list iodine content unless a food has been fortified with this nutrient.

Selenium: A deficiency in selenium can result in less iodine being available for the thyroid to use in making new hormones.

How to Choose the Right Potato For Your Dish

Pack Your Own Security-Approved Vegetarian Food for Air Travel