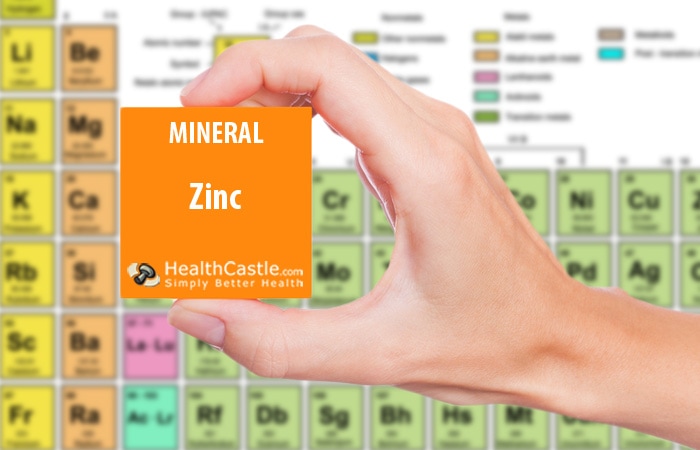 Zinc is a mineral found in every body cell. It has been used since ancient times to help heal wounds, and it plays an important role in the immune system, reproduction, growth, taste, vision, smell, blood clotting, and proper insulin and thyroid function, to name just some of its important effects in the body.

The Dietary Reference Intakes (DRI) for zinc are shown below:

What Does ​Zinc Do?

Zinc is essential for many processes in the body. It is a very important coenzyme assisting in the production of hemoglobin, indirectly supporting the adequate transport of oxygen to our cells. It also acts as an antioxidant by helping to fight the oxidative damage caused by free radicals. It helps enzymes to generate energy from carbohydrates, fats, and protein and helps activate Vitamin A in the retina of the eye. Zinc plays a role in supporting smell and taste sensitivity, as well as promoting wound healing.

Zinc is an important regulator of many genetic activities. It plays a role in facilitating the folding of proteins into the biologically active molecules used in gene regulation. It is critical for cell replication and normal growth.

Zinc is essential for the proper development and functioning of the immune system. Many types of immune cells depend on zinc for optimal function. In some studies, zinc deficiency has been shown to compromise white blood cell numbers and immune response, while zinc supplementation has been shown to restore conditions to normal.

Zinc helps to balance blood sugar by regulating the production, storage, and release of insulin. Insulin is a hormone required to move sugar from our bloodstream into our cells. The response of our cells to insulin is called insulin response. When the foods in our diet do not provide us with enough zinc, insulin response decreases, and blood sugar remains high. Metabolic rate, the rate at which we create and use up energy, is also dependent on zinc for its regulation. When zinc is deficient in the diet, metabolic rate drops, as does the hormonal output by the thyroid gland.

Both zinc deficiency and zinc toxicity are rare in industrialized countries. Low zinc levels are sometimes seen in the elderly, alcoholics, people with anorexia, those on very restricted diets, and people with malabsorption syndromes, such as Crohn’s disease or celiac disease. Zinc toxicity can occur from consuming zinc in supplement form and in fortified foods.

The best sources of zinc are high-protein foods like seafood, meat, beans, and lentils. Some dairy products also have zinc.

In the United States: The % daily value gives you an idea of how much zinc is in the food you eat. The daily value for zinc is 15 mg, which is higher than the DRI for adults. The number you see on the Nutrition Facts label is a percentage calculated by dividing the amount of zinc in one serving of the food by the DV. Using an example from the above table, 3/4 cup of cooked chickpeas containing 1.9 mg of zinc would have 13% of the DV for zinc. The FDA does not require that the % daily value for zinc be listed on the Nutrition Facts label.

Chromium: There is early evidence that chromium and zinc could each reduce the absorption of the other. However, this is likely only a problem with supplemental doses of both.

Copper: Large amounts of zinc can reduce copper absorption and can cause significant copper deficiency and anemia, a condition in which the blood cannot carry enough oxygen.