Mangosteen, despite its name, is not related to mango – another well-known and loved tropical fruit. Mangosteen is native to the most tropical countries of South East Asia, such as Indonesia, Thailand, and Malaysia. The tree dies if exposed to temperatures below 40F. Our temperate North American climate, therefore, does not favor this fruit’s growing conditions. Instead, small quantities of fresh mangosteen are imported into the US and may be found in select grocery stores or in higher-end restaurants as a delicacy. In its native countries, though, mangosteen is considered a very common fruit, far from the “designer” label assigned to it here in North America.

A fresh unpeeled mangosteen has a dark deep purple/maroon color, with a green stem and “cap” consisting of a few green lobes. The peel or rind of the fruit (which is quite thick) is traditionally used to treat diarrhea, skin infections, and wounds. The fruit is white and comes in segments like those of an orange or tangerine. The fruit is sweet yet tangy, with a texture similar to that of a peach. 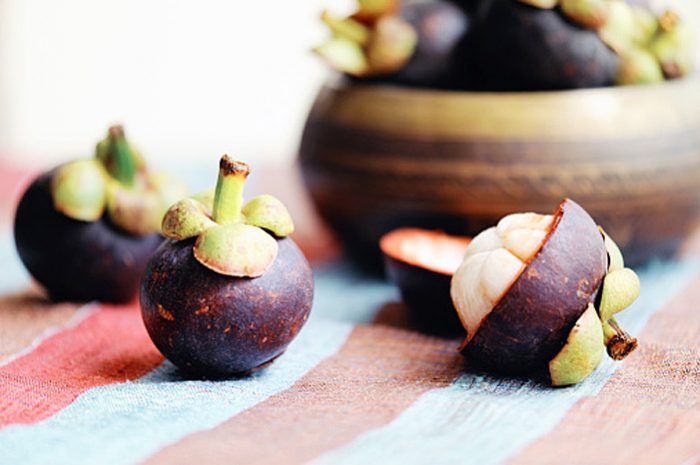 A January 2009 review in the journal Phytotherapy Research pointed to a group of chemicals collectively called the xanthones that seem to exhibit the most biological activity. Most of the xanthones in mangosteen exist in the dark-colored peel. Various studies examining the xanthones have demonstrated anti-cancer, anti-inflammatory, and anti-bacterial effects. It’s not clear how these results translate to the fruit’s effects on human beings since most of these studies were conducted on individual cells or rats. The peel on its own tastes quite astringent (mouth-puckering), so would not be eaten with the white segments.

Studies conducted on components found in the peel of mangosteen show some potential, but at this point we cannot definitively pinpoint exact health benefits for us humans. Also, the chemicals associated with the health properties of mangosteen are mostly found in the peel of the fruit, which is not usually consumed. The juice is quite expensive; a quick scan of ads shows that a 32-oz bottle of it will set you back about $30, which is a heck of a lot of money to spend for fruit juice! There is also the issue of quality control: there is no way to guarantee the amount of beneficial xanthones (or anything else) that you would get from consuming a serving of the juice. At the end of the day, why bother getting your fruits as juice when you can eat them fresh? And let’s face it, if you are trying to live a greener way of life by choosing local whenever possible, eating juice that has been processed, shipped or flown from thousands of miles away just doesn’t do justice to the environment or your food miles.