If when you think of tomatoes you picture the average grocery-store tomato, you need to discover the world of heirloom tomatoes. This month we feature these beautiful tomatoes that are well known for their rich tapestry of colors and diverse flavors. Heirloom tomatoes are also known as heritage tomatoes, and are so named because they are grown from seeds that are at least 50 years old, which are passed down through many generations of a family like an heirloom. They were introduced to North America when immigrants brought these prized seeds over from Europe. The typical tomato you see at a grocery store is actually a commercially bred hybrid tomato, whose seeds cannot be re-planted. This is not the case for heirloom tomatoes. As the result of open, natural pollination, heirloom tomatoes enjoy greater diversity and therefore come in all shapes, sizes and flavors.

Other interesting aspects of heirloom tomatoes include their unique names and the stories behind them. For example, it is said that the Mortgage Lifter, a large, meaty tomato, was created by a planter who claimed that the tomato was so meaty that it could feed a family of up to six. He sold these tomatoes for the high price of a dollar each in the 1940s and made so much money from them that he paid off his mortgage in four years. Then there is the Green Zebra, a tomato that is green and has stripes like a zebra when ripe, which is actually not a true heirloom, since it was created in North America within the last 20 years. 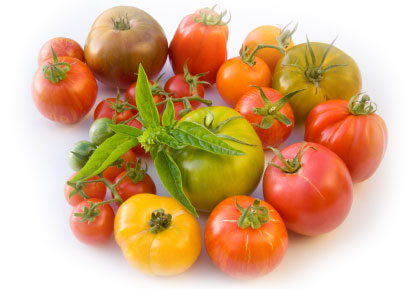 Not only are they delicious, tomatoes (regular and heirloom alike) are arguably one of the healthiest foods on earth. They are rich in Vitamin C, Vitamin A, and Vitamin K, and potassium, among many other vitamins and minerals. Tomatoes are also widely known as a good source of lycopene, a kind of carotenoid that has many well documented health benefits. In a 2004 meta-analysis done by researchers from the Royal Victoria Hospital and McGill University in Canada, where the findings from 22 studies were summarized, the researchers confirmed that the lycopene in tomato products may play a role in the prevention of prostate cancer. Lycopene, when combined with green tea, was also shown to help protect against prostate cancer, according to a group of Australian researchers in a study published in 2007. Tomatoes and tomato products have also been studied for their positive impact on cardiovascular health. For example, Vitamin C is a powerful antioxidant that can help to reduce oxidative damage, potassium is known to lower blood pressure, and people with high blood folate levels have been shown to have a lower incidence of heart attacks, according to a group of Finnish researchers in a study published in 2000.

When buying heirloom tomatoes, pick ones that have smooth skins with no wrinkles, cracks, or bruises. They should yield to slight pressure but should not feel mushy. If they are hard, let them sit at room temperature until soft before using. Heirloom tomatoes should not be stored in the refrigerator.

Ways to Include More Heirloom Tomatoes in Your Diet

Like regular tomatoes, heirloom tomatoes are versatile and can be added to plenty of dishes, such as soups, salads, sautes, salsa dips, pizza, sandwiches, etc. Here are some more specific suggestions by Carl Hills, owner of Kimball Fruit Farm in Pepperell, MA, regarding some commonly seen heirloom tomato varieties: