In June 2012, a Dutch study published in the Food Quality and Preference journal reported that substituting salt with naturally brewed soy sauce can reduce sodium content by one-third without compromising taste. How is this possible, when most of us equate soy sauce with high sodium? Soy Sauce 101: Not All Soy Sauces are Created Equal 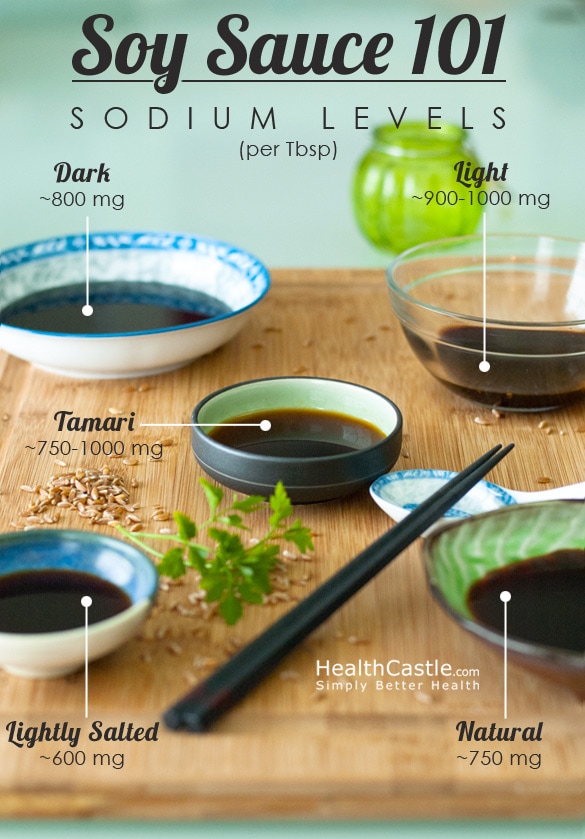 Naturally brewed soy sauce is actually the liquid resulting from a boiled, mashed, fermented, and aged mash of soybeans, sometimes with added wheat. The culture used for fermentation is a mold, and sometimes bacteria and yeast. The aging process can take months or even years; unfortunately, many cheaper modern soy sauces are no longer made this way. Instead, salt, hydrolyzed soy protein, flavorings and/or colorings are mixed together to create a dark sauce that approximates the saltiness, but none of the flavors, of traditionally brewed soy sauce. We even discovered a soy sauce packet from a Japanese takeout restaurant that contains high fructose corn syrup and caramel coloring!

What Should You Look For When Buying Soy Sauce?

Whatever brand  you choose, read the ingredients and it should be fairly clear. A naturally brewed or traditionally brewed soy sauce should contain no more than the following ingredients: water, soybeans, maybe wheat, salt, and a starter culture (the mold used to ferment the mash). A genuine, naturally-brewed soy sauce contains no preservatives; therefore it should be refrigerated once it’s open.  If the bottle of soy sauce you are checking out contains hydrolyzed soy protein, artificial colorings, artificial flavorings, or other thickeners, put it back on the shelf.

For condiments and processed sauces, label reading is a given in today’s marketplace. Who knew there were so many things to watch out for in something as seemingly simple as soy sauce!

Tell Us: Do you have a favorite soy sauce brand?