Can Fried Foods Increase the Risk of Prostate Cancer?

When you go to a drive-through or eat out at a fast food joint, what do you get? The typical fried items on a fast food menu are fries, doughnuts, or chicken strips. Variations exist, but certainly the prevailing generalization is that these items are deep-fried.

It’s not surprising that frequent consumption of deep-fried foods can seriously impact your weight in addition to having an undesirable effect on your cardiovascular health. A high-fat dietary pattern has also been linked to increased risk of several types of cancers. 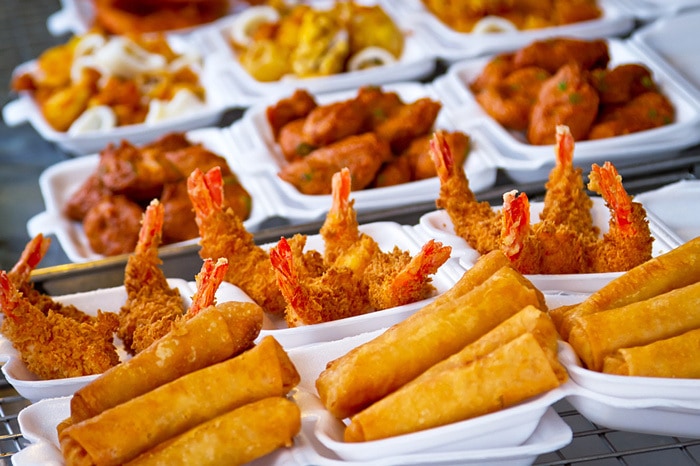 Now researchers at Seattle’s Fred Hutchinson Cancer Research Center have also linked regular consumption of deep-fried foods to an increased risk of prostate cancer, specifically a more aggressive form of the cancer. They looked at men who ate deep-fried foods regularly. Specifically, the items were French fries, fried chicken, fried fish, doughnuts, and snack chips. Those who ate one or more servings of fries, fried chicken, or doughnuts per week had a 30% to 37% higher risk of prostate cancer than those who ate less than one serving per week.

We have previously discussed the link between grilling meats and formation of potential carcinogens. This study is different in that it examines the link between deep-fried foods and carcinogens. While the study did not specifically investigate why there is a link between deep-fried foods and increased prostate cancer risk, the researchers suggest one of the factors could be carcinogens in the oil or fat used for frying. When oil is heated to the high temperatures used in frying, some compounds that can be potential carcinogens are also formed. For example, acrylamides are formed when high-carbohydrate, low-protein foods are subjected to very high temperatures, as in the making of potato chips or French fries.

This gets worse when the oil is reheated, which is exactly what happens in a fast food or restaurant setting – the oil will be reused  for frying several batches before being replaced.

Fried Foods: The Obvious and Not So Obvious

Mention deep-fried foods and what comes to mind? The obvious ones are steaming hot and instantly grease up your fingers:

The following common snack foods are also deep-fried (even though they come out of a bag):

Consider these other examples of convenience/frozen food items that are typically pre-fried and then reheated or cooked at home:

In addition, these popular ethnic restaurant items are commonly deep-fried:

Top 4 Foods That Can Save Your Prostate

Did you know that more than 50% of men suffer from an enlarged prostate by the time they turn 60, and the odds increase to 90% by age 85? Common symptoms include a frequent urge to urinate, a weak urine stream, dribbling, and even pain during urination. Benign prostatic hyperplasia, or BPH, is estimated to affect more than 16 million men in the United States, making it the most common urological problem in men. Fortunately, studies have shown that dietary modifications may reduce the risk. Here is how you can increase your odds of being part of the 50% that is BPH-free at 60:

VegetablesSince they are such good sources of micronutrients and antioxidants, it is no surprise that vegetables may help ward off prostate problems. In a study published in 2008, Seattle researchers found that men who ate four or more servings of vegetables per day had a 32% reduction in risk for developing BPH, compared to men who ate less than one serving. For maximum benefits, focus on vegetables rich in lutein (e.g., spinach and kale) and beta carotene (e.g., carrots and yams). Researchers from John Hopkins and Harvard saw decreased risk of BPH symptoms and surgery for those who had high intake of lutein and beta carotene in a large trial in 2007.

Vitamin C-rich foodsIn the same 2007 trial, the researchers also discovered that those who have high dietary Vitamin C intake are 10% less likely to have symptoms of BPH. They also found that orange juice drinkers seem to be protected against BPH. However, Vitamin C supplements have not been shown to be effective. So opt for high-Vitamin C foods, such as citrus fruits, strawberries, tomatoes, and cauliflower.

Tomato-LycopeneYes, tomatoes again! The message really is loud and clear that tomatoes are the top prostate-friendly food. In addition to being a good source of Vitamin C, tomatoes are also rich in lycopene, which has been shown to lower the risk of BPH and prostate cancer in many studies.

Shellfish-ZincOysters are believed to have an aphrodisiac effect, but they are good for your reproductive system in more than one way. Oysters (and some other shellfish) are a remarkable source of zinc, which made it onto the Seattle researchers’ list of prostate-friendly nutrients by cutting the risk of BPH by 32%.

Since men are more than likely to be affected by an enlarged prostate at some point in life, it would be wise for every man to consume a variety of prostate-friendy foods to reduce risk. Help your prostate stay slim by eating plenty of vegetables – especially tomatoes – and zinc-abundant shellfish. But forget about taking supplements. Neither vitamin, mineral, or herbal supplements (such as saw palmetto) demonstrate any benefits, according to Canadian researchers in a review published in 2009.

We know on occasion people will eat fried foods. However, it may be worth taking a look at how you define “moderation” when it comes to deep-fried foods. One serving of any of the above food examples once a week is not a very high threshold.

With many deep-fried foods, you are also getting too much of the undesirable type of fat, refined carbohydrates, sodium, and other additives such as preservatives, flavoring, or coloring. While this study looked specifically at men who consume deep-fried foods, the rest of us would still benefit from cutting down on deep-fried foods.

Is Sugar Worse Than Fat?