Say hello to beets, our pick this month. To the uninitiated, beets can seem rather intimidating, with a rugged, dull exterior. But the rough peel hides a colorful, nutritious, and tasty gem – when cooked, beetroot’s texture changes from crunchy to soft, and the sweet taste is a pleasant bonus! It’s truly a diamond in the rough. If you have only ever tried canned beets, then you must give fresh or cooked-from-scratch beets a try. You will be amazed at their unique taste! Beets belong to the same family of plants as Swiss chard, and those who have seen these side-by-side will notice the striking similarity in the leaves. 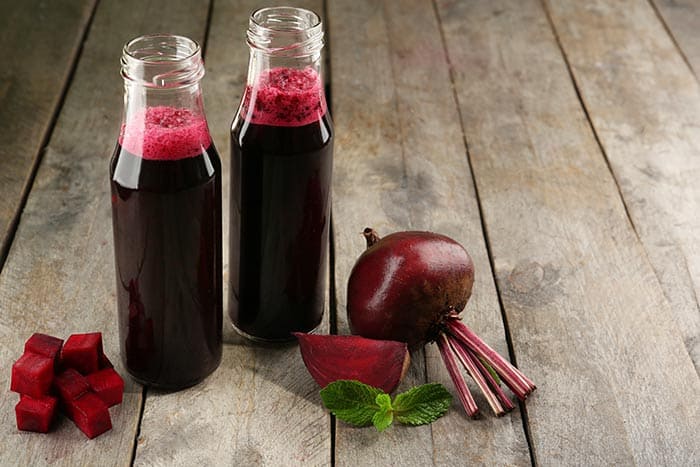 Beets are packed full of various nutrients, such as folate (which is important in prevention of neural tube defects in the growing fetus), manganese, and potassium. And their deep purple hue is due to a powerful set of pigments called betacyanins, which appear to be powerful cancer fighters. Some studies show beets to be helpful in reducing inflammation and protecting against heart disease.

Another superpower nutrient found in the beetroot family is nitrates. Beets contain high levels of nitrates (NO3); after ingestion, our body will convert it into active nitrite (NO2) and nitric oxide (NO). Nitric oxide is able to help relax and dilate our blood vessels.

The potential benefits of blood pressure-lowering effect have been occasionally brought up for years, but when a review study of 16 trials was published in 2013, the benefits of beetroot juice became more established, particularly on the lowering systolic pressure. An average of 8 mmHg drop in systolic pressure and 4 mmHg drop in diastolic pressure were observed. The researchers compared this improvement to conventional medications treating hypertension, which resulted in a drop of 9 / 5 mmHg, and found that beet juice produced a comparable result.

Another recent study published in 2016 looked into the effect of beet juice on a senior’s population with a medical history of high blood pressure. Participants drank only 70 mL of beet juice for 7 days, and saw an average of 14 mmHg drop in systolic pressure! That is a very significant amount.

A 2012 published study revealed that eating 200 grams of baked beets improved running performance and the average running speed in the last mile also increased by 5%.  Researchers found that both placebo and the beet groups started out with a similar performance, but the beet group started to pull ahead in the last mile. Heart rates were the same between two groups; the beet group just seemed to be less strained and fatigue. Another 2011 study on the effects of drinking 2 cups of beetroot juice on cycling performance also found a similar improvement. Results showed that the average 4-km time trial was improved by 2.8% while the 16.1-km time was improved by 2.7%.

Note that blood nitrate levels peaked 2 to 3 hours after drinking beet juice, therefore if you are interested to try, drink it 2 to 3 hours prior to your competitive event.

How To Choose and Prepare Beets

When buying fresh beets, look for small or medium-sized “bulbs” that are firm, with smooth or taut skin. Avoid any with soft spots. Besides those with purple shades, you can also find yellow or orange-hued varieties. If the beets are sold with their greens attached, separate the leaves from the roots and consume within a few days (beet green are great stir-fried). The roots will keep for a couple of weeks in the refrigerator. When you peel beets, wear gloves because the pigment will stain. If you want to maximize the nutrient retention, cook the beets unpeeled and in as little water as possible (such as by roasting them in the oven), then peel them after they’re cooked.

Ways to Include More Beets in Your Diet