In the battle of the bulge, fat has historically been perceived as the enemy. As we learn that not all types of fats are created equal, the culprit now more often mentioned is added sugar. How much added sugar is in the American diet? 2010 USDA estimates put the consumption level at a staggering 132 lbs of sweeteners per year per person (66 lbs of cane sugar, 64.5 lbs of corn-derived sweeteners, and 1.5 lbs of honey or other edible syrups). 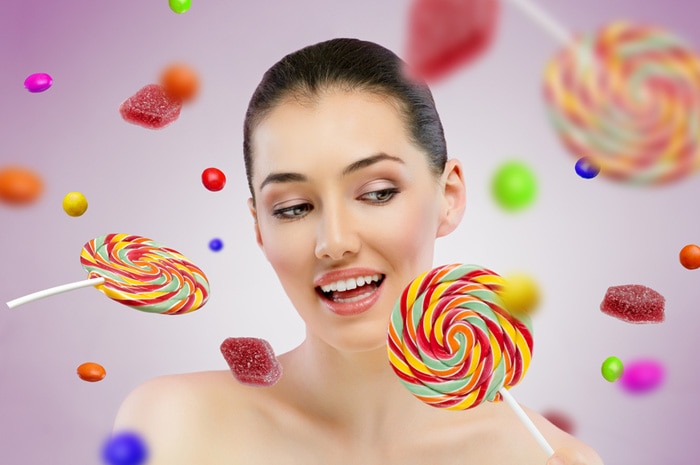 Where to Find Added Sugars in the Diet

Clearly, we aren’t shoveling in mouthfuls of sugar, honey, or corn syrup daily to get to such a high level of consumption. So where is all this sugar coming from? A 2013 study in the Journal of the Academy of Nutrition and Dietetics looked at the consumption patterns of sugar-sweetened beverages (excluding artificial sweeteners) from several cycles of the National Health and Nutrition Examination Survey (NHANES) between 1999 and 2008 and found the following:

In addition to added sugars coming from sweetened beverages, added sugar has also found its way into many processed goods, such as cakes, cookies, ready-to-bake mixes, and commercial desserts, as well as breakfast cereals, energy bars, granola bars, and pre-packaged snacks.

What Does Excessive Sugar Intake Do?

Using the USDA estimates of 132 lbs of sugar per person per year, this translates to 3/4 cup of added sugar, or 580 kcal per day! This level of consumption will set you up for a pound-a-week rate of weight gain. Besides contributing excess calories that lead to weight gain over time, high sugar intake may have metabolic effects. Another study looking at children aged 3 to 11 participating in the NHANES found that increased consumption of sugar-sweetened beverages was associated with increased C-reactive protein concentrations, increased waist circumference, and decreased HDL (“good” cholesterol) levels. These are all markers for cardiovascular disease risk.

How Much Weight Can be Lost by Cutting Sugar?

The actual impact of cutting sugar intake will vary from one individual to the next. In a February 2013 article in the Journal of the Academy of Nutrition and Dietetics, U.S. researchers estimated that switching from sugar-sweetened drinks or flavored milk to plain low-fat (1%) milk or water between meals saved an average of 205 kcal per day from a child’s daily intake. That’s almost half a pound of weight loss each week!

Be on the lookout for added sugar in the foods you eat and your beverage choices. Better yet, make it a point to prepare your foods and drinks yourself (including smoothies) to manage how much sweetener you add.