It is probably fair to say that celeriac is one of the most ignored root vegetables in North America. Also known as celery root, soup celery, celery knob, and turnip rooted celery, celeriac is a special type of celery that was originally grown in Northern Europe and the Mediterranean, and is still a popular ingredient for Europeans. Roughly the size of a turnip, celeriac has a large, bulbous root that is covered with thick, rough skin that is marked by brown patches. Its unglamorous appearance does not do its flavor justice – its crisp texture, as well as its celery and parsley-like flavor, is a great addition to any dish that goes well with celery. October is the time to try this strange-looking root vegetable, as it is generally available from October through April. 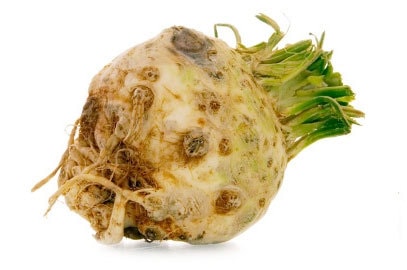 Compared to other root vegetables, such as potatoes and carrots, celeriac is very low in calories, as it is only 5-6% starch by weight. It can therefore be used in place of other starchy root vegetables to cut down on calories, or as a carb option for people with diabetes. Celeriac is rich in potassium and is also a good source of Vitamin C.

It is best to pick celeriacs with small to medium-sized roots, which tend to be more flavorful and less fibrous. Although the stalks and leaves are usually not eaten, the sprouting green tops should be bright green and the root part should not have brown soft spots. Celeriac can be stored in the refrigerator for up to a week, wrapped in a perforated plastic bag with its stalks and leaves removed.

Ways to Include More Celeriac in Your Diet