Summer is here, and people everywhere are firing up their grills with thoughts of great-tasting barbecue dishes. Most often, what comes to mind is the sight, sound, and aroma of a sizzling steak. But steak is far from the only option! With so many different cuts of meat, how do you know what works best for the grill? Which cut is the leanest? 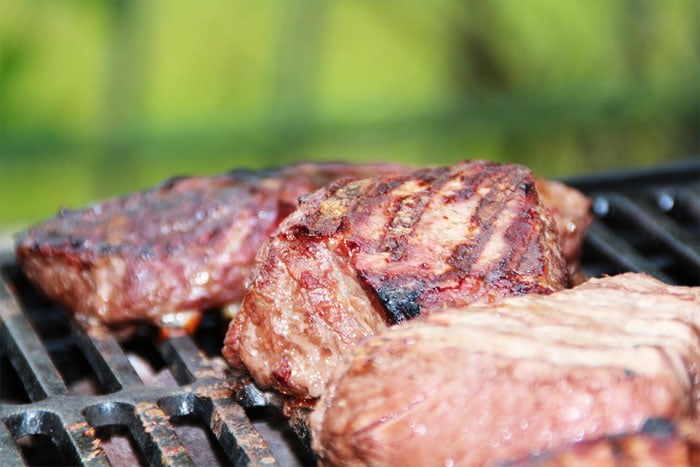 *One serving of meat is 3 oz, which is roughly the size of a deck of cards. Most restaurant meals serve much bigger portions, so be aware that you’re getting multiple servings on your plate; it’s best to share bigger cuts among two or three people. The nutritional information assumes all visible fat is trimmed and not eaten (except for marbled cuts which have the fat incorporated within the meat, making it inseparable).

Grilled meats contain two substances that are considered carcinogenic – HCA and PAH. To minimize your exposure to them, grill smaller cuts of meat (to shorten cooking time), and marinate your steaks (which has multiple benefits: it flavors the meat, tenderizes it, and reduces the build-up of HCA). And of course, common sense will tell you to cut and discard any charred bits.

Is It Done Yet?

If you are a barbecue rookie, you can check for doneness two ways: with a meat thermometer or using Chef Reader’s hand-touch method. Both are provided below. When using a meat thermometer, insert the probe into the thickest part of the meat without touching any bones.

When “Zero” Isn’t Really Zero: How to Spot Trans Fat in Foods

What’s in Your Energy Drink? Are They Effective?