Say water and what comes to mind? Hydrating, tasteless clear fluid. Now, however, there are also many “enhanced” water products, such as Skinny Water, Vitaminwater, Propel Fitness water, and Smartwater. When they were sued by the Center for Science in the Public Interest (CSPI) for deceptive marketing, Coca-Cola, the maker of Vitaminwater, defended its product by saying, “No consumer could reasonably be misled into thinking Vitaminwater was a healthy beverage.” This defense suggests the word “vitamin” does not imply nutrients. 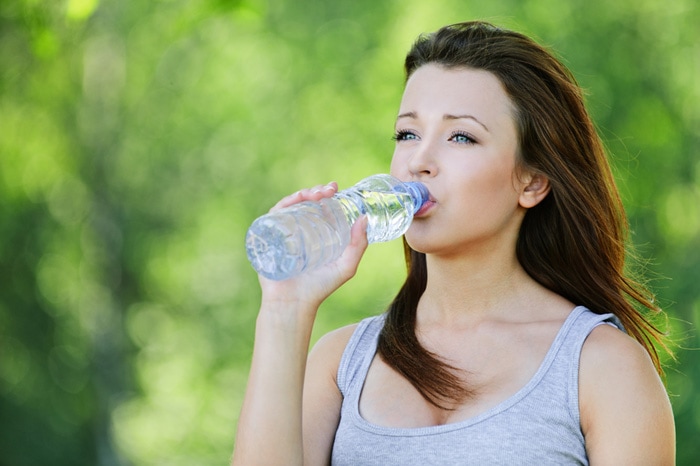 Why would water need anything added to it, and what is added? At the vending machine, when faced with a bottle of soda and a bottle of water with “benefits,” is one a better choice than the other? We take a closer look. Sugar and/or Other Sweeteners

The line of Vitaminwater products has 120 calories per 20-fl oz bottle, and 31 to 32 g of sugar. To use a comparison, a can of Coca-Cola has 39 g of sugar. To top it off, many of these products have more than just one sweetener added. Look at the ingredients and you will see items that signal sugar, such as cane sugar, crystalline fructose, or dextrose. For some low-cal or zero-cal lines such as SoBe Lifewater, the sweetener of choice is erythritol, a sugar alcohol which has very little caloric value.

Many products have coloring added; some use vegetable or fruit juice concentrates, while others such as SoBe Lifewater Yumberry Pomegranate use cochineal extract, which can be an allergen for some individuals. Some bottled water, like SoBe Lifewater with Coconut Water – Mango Mandarin flavor, contains caramel color.

This item appears frequently on ingredient lists, and there is no way to tell what it actually is.

We found unusual-sounding additives such as sodium hexametaphosphate, gum acacia, and glycerol ester of rosin. These types of additives are often found in citrus- or fruit-flavored beverages and function as an emulsifier. Why an emulsifier? The flavoring ingredient in these drinks tends to be an oil-based compound. The emulsifier prevents the flavoring oil from separating out and floating atop the water, so the drink tastes consistent from start to finish.

Depending on the product, these bottles of flavored water have different ingredients added – typically a selection of vitamins or some minerals such as magnesium, potassium, or zinc. The name of the drink hints at the intended benefits. For example, Vitaminwater’s “energy” has B vitamins and guarana added. The product “multi-v” has several vitamins added as well as some minerals.

The main fluid you use for hydration should still be water, not water with coloring, sugar, and artificial flavors added. The amount of vitamins or minerals you would get from drinking a bottle of flavored water isn’t worth the additives that tag along. If you are also trying to be environmentally conscious, drinking plain water in a reusable water bottle generates less waste than multiple plastic bottles of flavored water.

Get your vitamins and minerals mostly from the foods you eat. Drinking a bottle of flavored water does not replace eating fresh fruits and vegetables, which contain much more than the list of nutrients that fit on a Nutrition Facts label. In fact, research is finding that it is the synergy among all the different phytonutrients and vitamins/minerals within plant foods that matters more, rather than single individual vitamins or minerals.