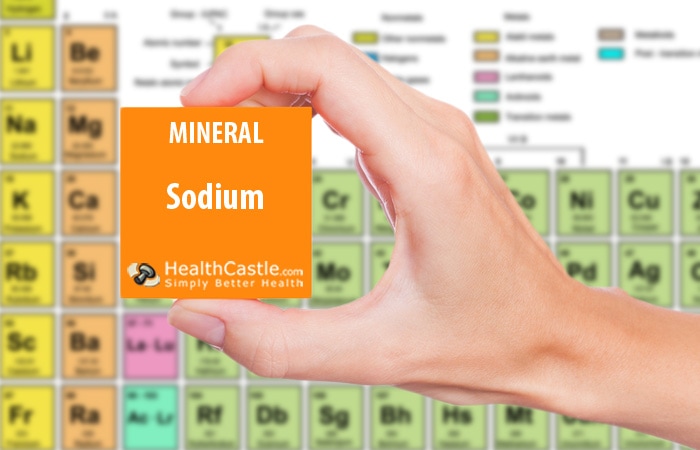 Along with chloride, calcium, magnesium and potassium, sodium is an electrolyte. Sodium chloride (40% sodium; 60% chloride) is the chemical name for salt. One teaspoon of salt weight 5 grams and contains about 2300 mg of sodium. On average, Canadians eat about 3400 mg of sodium per day. That’s more than 1000 mg above the daily maximum.

The Dietary Reference Intakes (DRI) for sodium are shown below:

What Does Sodium Do?

Sodium is the major positively charged electrolyte in the extracellular fluid. Its exchange with potassium across cell membranes allows our cells to maintain proper acid-base balance, blood pressure and fluid balance.

Sodium assists in the absorption of certain nutrients including chloride, amino acids, glucose, and water. Some nutrients cannot be passively absorbed into the cell through the cell membrane. For example, cells transport glucose via the process of active transport, which involves assistance from a sodium-potassium pump. This pump works by acting as a carrier protein that transports glucose through the cell membrane.

High blood pressure (also known as hypertension) is more common in people who consume high sodium diets. Whether or not high sodium diets actually cause high blood pressure is unclear and controversial. More research is needed in order to understand this better. Hypernatremia is a condition in which there is an abnormally high amount of sodium in the blood. This is not caused by eating too much sodium, but by those with congestive heart failure or kidney disease who are not able to excrete sodium from the body effectively.

Sodium deficiencies are very rare in the North American diet, as sodium is usually consumed in excess. Nevertheless, there are certain conditions that can cause dangerously low blood sodium levels, also known as hyponatremia. Hyponatremia can occur with severe diarrhea, vomiting, or excessive prolonged sweating. Active people who drink large amounts of water and do not replace sodium are also at risk for hyponatremia.

A small amount of sodium is found naturally in foods.

In Canada: The Daily Value for sodium is also 2400 mg. Listing the DV for sodium on the label is mandatory. Health Canada says that 5%DV or less is low and 20%DV or more is high. Therefore, using the example above, 29% DV for 1 tbsp on teryaki sauce is considered to be a high amount of sodium.