Have you heard of brominated vegetable oil, or BVO? If you drink sports drinks like Gatorade or sodas like Mountain Dew, you might want to learn more about this controversial ingredient that’s used in American products but is banned in Japan and the European Union. 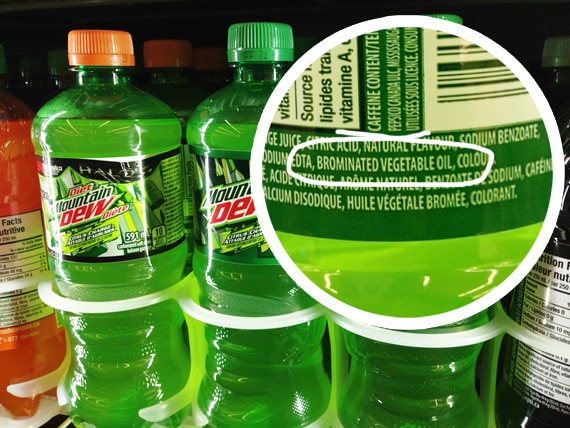 BVO is a food additive made from vegetable oil with the chemical bromine bonded to the oil. It’s used in several popular sports drinks and sodas to keep the flavor well blended throughout the drink rather than floating to the top. It’s a controversial ingredient because bromine is used as a flame retardant, and because excessive consumption can cause some serious health effects.

Most toxicology studies on BVO were conducted in the 1970s and ’80s on rats. All of the studies showed adverse effects. A 1970 UK study actually concluded “the high bromine levels found in the fat of tissues from UK children are due to the use of these compounds [brominated vegetable oils].”

A 1997 study documented a case in which a patient developed the condition of bromism from drinking at least two litres of cola every day. The patient complained of headache, fatigue, and memory loss. Neurological problems and a deteriorated nervous system eventually led to an inability to walk. This patient eventually needed hemodialysis, a treatment usually used for kidney failure.

BVO has been banned in the UK since 1970, later on in the EU, and most recently in Japan. Both the United States and Canada still approve this additive in our food. In countries where BVO is banned, natural hydrocolloids are used as a substitute.

Why is BVO in the News?

BVO has been used in soft drinks since 1931 – so why is it making headlines now? Much of the attention is due to an online petition on Change.org started by Mississippi teenager Sarah Kananagh, who was upset to find her favorite Orange Gatorade contained BVO. Sarah’s petition asking Gatorade to remove the ingredient got more than 200,000 signatures. On January 25, Gatorade announced that it would stop using BVO in its drinks, and said it was making the move in response to consumer demand.

Gatorade may be moving to eliminate BVO, but you can still find it in many soft drinks, especially ones that are citrus flavored. It’s tricky to compile a complete list because there are so many generic brands whose ingredients are hard to track. Check the label of any soft drinks or sports drinks you’re thinking of buying to be sure.

Does your favorite drink contain the controversial ingredient BVO? Here is a list drinks that contain BVO currently available on the market.

… and, until new versions hit the shelves, some flavors of Gatorade, including Orange.

This is just one more reason to avoid sodas and sports drinks, which are also full of sugar (or artificial sweeteners) and empty calories. If you stick to natural drinks like water, tea, or coffee, you don’t need to worry about the latest chemical ingredient scare.