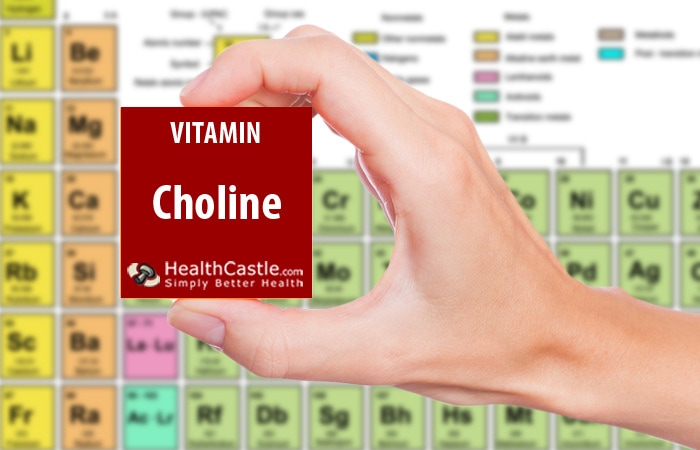 Choline is an essential nutrient. The majority of the body’s choline is found in specialized fat molecules known as phospholipids, the most common of which is called phosphatidylcholine or lecithin.

The Dietary Reference Intakes (DRI) for choline are shown below:

Because choline is water soluble, excessive intake of choline-containing foods has not been shown to be toxic to humans.

What Does Choline Do?

Choline plays a critical role in the structural integrity of cell membranes. It is necessary for the synthesis of phospholipids and other fat-containing structures in cell membranes. Choline also plays an important role in the transport and metabolism of fats. Choline is a component of a type of phospholipid called phosphatidylcholine, which is a necessary component of the fat particles that transport fat and cholesterol. Without adequate phosphatidylcholine, fat and cholesterol accumulate in the liver.

Choline is a major source of methyl groups. Chemically, choline comprises three methyl groups, making its role in methyl group metabolism highly important. Many crucial chemical events in the body rely on the transfer of methyl groups from one place to another. For example, studies have shown that choline may lessen chronic inflammation in the body through the process of methylation. Choline and its metabolite betaine work together to remove homocysteine and turn off the promoter regions of genes involved in inflammation. Chronic inflammation has been linked to a wide range of conditions including heart disease, osteoporosis, cognitive decline and Alzheimer’s, and type 2 diabetes.

Choline plays an important role in supporting nervous system activity. Choline is a key component of acetylcholine, a neurotransmitter in the nervous system that carries messages to and from nerves. Because of its role in nerve-muscle function, choline supplements have been used experimentally to help improve neuromuscular function in Alzheimer’s disease patients.

Choline deficiency is uncommon; however, there are some factors that can contribute to choline deficiency, including very poor intake, liver problems such as cirrhosis, total parenteral nutrition (TPN), gastric bypass surgery, and kidney transplant.

In the United States and Canada, there is no daily value established for choline.

Niacin: Niacin is necessary for the synthesis of choline.

Folate: Folate is necessary for the synthesis of choline.