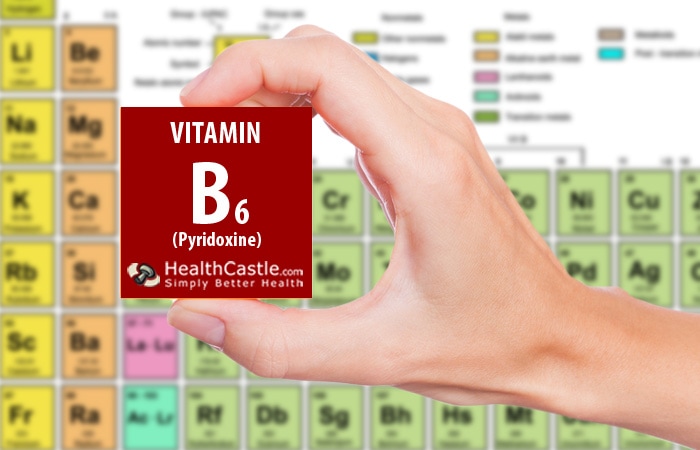 Vitamin B6 is one of eight B vitamins. All of the B vitamins are water soluble, meaning that the body does not store them but excretes them in the urine. Other names for Vitamin B6 include pyridoxine, pyridoxal, and pyridoxamine.

The Dietary Reference Intakes (DRI) for Vitamin B6 are shown below:

se Vitamin B6 is water soluble, excessive intake of foods containing Vitamin B6 has not shown to be toxic to humans.

What Does Vitamin B6 Do?

Like the other B vitamins, Vitamin B6’s main role is to help your body use carbohydrates and protein to make energy. Your body needs Vitamin B6 for more than 100 enzyme reactions involved in metabolism. Some of these reactions include the breakdown of fatty acids and gluconeogenesis, and the release of glucose from glycogen, which in turn helps to maintain normal blood sugar levels. B-complex vitamins are also needed for healthy skin, hair, eyes, and liver, and they help the nervous system to function properly.

Vitamin B6 helps the body synthesize several neurotransmitters, chemicals that carry signals from one nerve cell to another. These neurotransmitters are needed for normal brain development and function. B6 also helps the body make the hormones serotonin and norepinephrine, which influence mood, emotions, sleep patterns and appetite; and melatonin, which regulates sleep and wake cycles.

Vitamin B6 helps prevent anemia by playing a part in iron transport and metabolism. Specifically, it helps form hemoglobin, which carries oxygen in your blood.

Research has shown that Vitamin B6 supplements may play an important role in decreasing nausea and vomiting during pregnancy and reducing premenstrual syndrome symptoms. Furthermore, studies show that people with low levels of Vitamin B6 in the blood might have a higher risk of certain types of cancer, such as colorectal cancer, and that elderly people who have higher blood levels of Vitamin B6 have better memory. However, the results of these studies are currently inconclusive.

Niacin: Vitamin B6 assists in the formation of niacin from tryptophan.