Whether you’re a winemaker, a sommelier, or simply someone who loves a good bottle of wine, the vast variety of wine offerings offers an adventure for your palate. But just how do the different wines stack up as far as calories, carbs, and alcohol content? 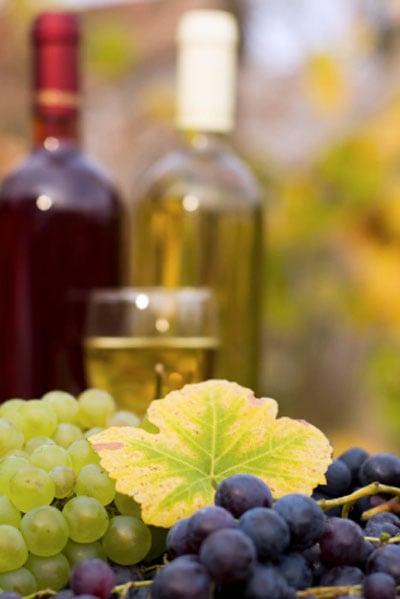 The following table compares the nutritional values of some popular wine varieties.

What’s in a Grape

Wine grape varieties represent only a small portion of the more than 600 kinds of grapes, and each grape variety has its own unique combination of characteristics, including color, size, skin thickness, acidity and flavors. Vineyards grow a variety of grapes to make wines called varietals, which simply means wines made from a single kind of grape.

This category of wine includes the range of yellow, golden wines created from the juice of grapes which is immediately removed from the skins and seeds just prior to fermentation. Although Chardonnay still reigns as the queen of white wines, the spicy to slightly sweet Gewurztraminer; the light, fruity Riesling; and Pinot Grigio and Pinot Gris, both from the same grape, are just a few of the white wines attempting to give Chardonnay a run for its money. Gewurztraminer, Riesling, and Pinot Gris and Pinot Grigio are all names for their grapes rather than their regions of origin.

The white wine varietals average around 119 calories per 5 oz glass, yet vary in carbs and alcohol content more so than the red wine varietals.

Red wines get their color from grapes with red and purple skins and can range in color from bright red to near black. Cabernet Sauvignon’s intense flavor and complexity make it one of the most recognized red-wine grapes; Merlot, with higher sugar levels and lower tannins than Cabernet Sauvignon, has been experiencing increased popularity in recent decades; and Pinot Noir, the red grape of France’s Burgundy region, is another fine variety of red wine.

Blush or rose is a generic term given to wines that are produced from red grapes whose skins have been removed early in the fermentation process, giving the wine its distinctive light pink to light apricot hue. Late Harvest wines are made from grapes that are picked toward the end of the harvest, yielding extremely ripe grapes with higher sugar content, increased sweetness, and higher alcohol content. These wines are most often used as dessert wines.

Blush and rose wines jump slightly in calorie and carb counts, but it is the late harvest wines that see a dramatic increase in calories and alcohol content.

Most sparkling wines are blends of several grape varieties that go through a “secondary fermentation” that allows the carbon dioxide gas that was released during the first fermentation to be reintroduced and dissolved into the wine, giving the wine its characteristic bubbles. Champagne is a sparkling wine produced exclusively in the Champagne wine region of France.

Sparkling wines have reduced calorie and carb levels compared to the red and white varietals, with a slight increase in alcohol content.

Fortified wines are clearly the highest in calorie, carb, and alcohol contents.

Whether you are a loyal Chardonnay enthusiast, port sipper, or experimenter with the more recent eco-friendly “green” organic wines, the calories and alcohol content can vary with each glass just as vineyards vary in their varieties of grapes. The ripeness of a grape may be an indicator of higher calorie and increased alcohol content.

For those who choose to drink alcoholic beverages, the current recommendation, as stated in the Dietary Guidelines for Americans, is up to one drink per day for women and up to two drinks per day for men. One drink is equivalent to 5 fluid ounces of wine.