With the movement towards minimally processed whole foods, consumers are paying more attention to what food additives are in the foods they eat. With that in mind, what are the food additives you should avoid, and where are they found? 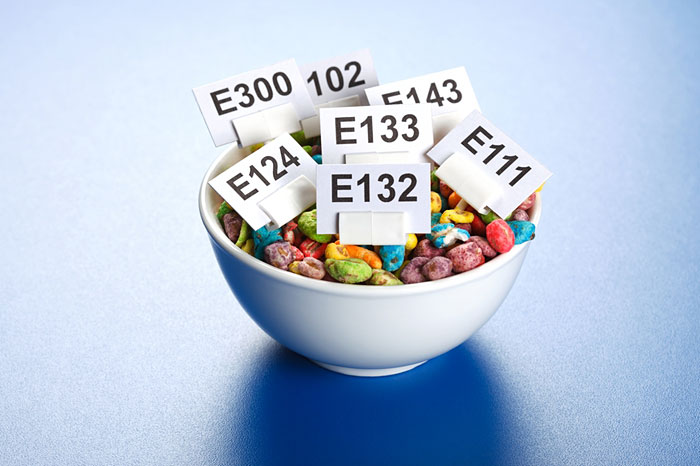 Where? Artificial colors are found mostly in processed foods, such as soda, candy, gelatin dessert such as Jell-O, and some pre-packaged baked goods. While it is no surprise that most junk foods have artificial colorings added, artificial colorings have also found their way into breakfast cereal (Fiber One Original, Froot Loops), yogurt (Breyers’ Smooth & Creamy), and packaged pasta mix (Kraft Dinner – Macaroni and Cheese). This is where being a label reader still pays off.

​Why avoid? The health concerns with this particular group of food additives range from possible hyperactivity in children to cancer in laboratory animals to possible allergic reactions. Artificial food colorings are unacceptable because alternatives for coloring food do exist in nature – think turmeric (yellow), beets (shades of red or pink), paprika (orange), or annatto (yellow). The use of artificial colors is often a signal that an actual ingredient (such as fruit) is missing from the food, and therefore must be replaced by coloring the food a shade that approximates the real thing.

​Why avoid? In the case of caramel coloring produced by the use of ammonia, two contaminant compounds produced have been shown to cause cancer in lab studies. California’s Environmental Protection Agency lists ammonia-caramel coloring as a carcinogen, and requires products exceeding a threshold of 29 mcg to bear a warning. The Center for Science in the Public Interest (CSPI) reported that as of March 2012, some soft-drinks purchased in the DC area still exceeded the 29 mcg threshold set.

Where? ​In diet sodas, “no sugar added” beverages and candies, breakfast cereals, ice cream, and yogurt.

​Why avoid? ​As HealthCastle.com’s own Editor-in-Chief Gloria Tsang points out in her book Go UnDiet, studies have not conclusively shown that artificial sweeteners help with weight loss. In fact, animal studies appear to show they may promote weight gain, possibly due to over-consumption of other foods to compensate for the reduced calories in the artificially sweetened ones. A large-scale study called the Framingham Heart Study actually found that regular consumption of sodas, whether diet or regular, resulted in a 50% higher risk of having metabolic syndrome.

Where? In cured or processed meats such as hot dogs, bacon, ham, and other luncheon meats. Nitrates/nitrites act as preservatives and also help give the processed meats their pinkish hue. However, nitrates or nitrites can react with other byproducts of digestion to form nitrosamines, which are known carcinogens.

Why avoid? Regular consumption of processed meats has been linked to higher risk of certain cancers. The so-called “nitrite-free” or naturally cured products do not fare better: They use celery juice extract or celery powder, which are also high in nitrates. Processed meats are typically also high in sodium and saturated fats.

Why avoid? ​Partially hydrogenated oils in foods mean you are consuming trans fats, which adversely affect your blood lipid profile: lowering the HDL (“good”) cholesterol and raising the LDL (“bad”) cholesterol. This raises the risk of heart disease. In addition, foods containing trans fats tend to be high in sodium or sugar and high in total fat as well, both factors of concern when it comes to cardiovascular disease risk.

Staying away from food additives is an evolving job that nowadays requires vigilant label reading. Your best bet in avoiding most of the additives in our food system is to stay away from the boxed “stuff.” Stick to mostly fresh fruits and vegetables, whole grains and legumes you cook from scratch, and lean proteins you buy raw and cook at home. Yes, it does require some time to do, but your body is worth that investment.