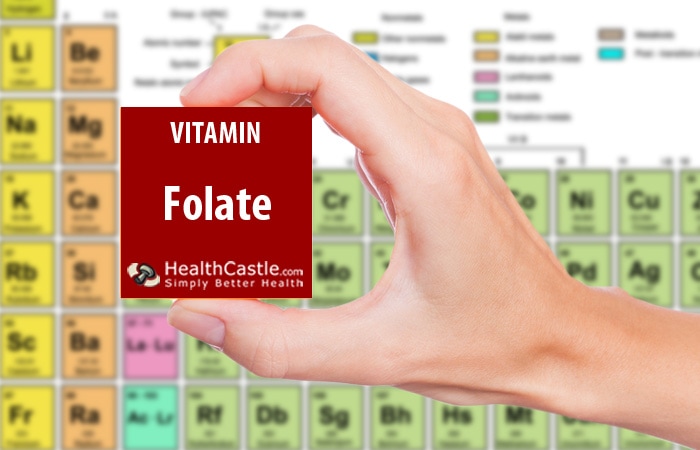 Folate is a B vitamin that occurs naturally in some foods. As a supplement, or when added to fortify foods, it is known as folic acid.

Folic acid from supplements or fortified foods is more bioavailable than the naturally occurring folate in foods. Therefore, the recommended dietary intake is defined as mcg (micrograms) of dietary folate equivalent (DFE). This takes into account that the average daily intake of a North American will include both folate from food and folic acid from fortified foods such as breakfast cereal, pasta, and some flours.

*The upper intake levels apply only to the amount of folic acid obtained from supplements or fortified foods. High intakes of folate from food sources do not appear to cause adverse effects.

There is no recommended dietary intake for infants from birth to 12 months. Instead, the adequate intake is used, which reflects the mean folate intake of healthy breastfed infants in the United States.

What Does Folate Do?

Folate is involved in many important processes in the body, including DNA/RNA synthesis, proper cell division, and metabolism of amino acids. This means it has a huge role to play during periods of rapid cell division and growth, such as when a fetus is growing in the womb. It is an essential nutrient important in the prevention of neural tube defects in a developing fetus. Neural tube closure occurs early in pregnancy (around the third to fourth week), in some cases before a woman knows she is expecting a baby, so it is important to ensure sufficient folate levels even before pregnancy.

This list includes both foods that are naturally high in folate and foods that have been fortified with folic acid (marked with a *). Both the United States and Canada fortify a wide range of cereals and grains, so fortified foods are an important contributor of folic acid to the average North American diet.

Because folate is a water-soluble B vitamin, boiling or cooking in liquid will cause a portion of the folate to be lost to the cooking liquid. So if you are cooking your leafy greens, choose minimal liquid methods (such as quick stir fry) and/or use the cooking liquid.

Given that folic acid–fortified foods contribute, in some cases, a much higher dose of folic acid than natural food sources of folate in a given serving, is getting too much folic acid a concern? Very high doses of folic acid may mask the neurological damage resulting from Vitamin B12 deficiency; the folic acid “corrects” the megaloblastic anemia, but the neurological damage continues. Extremely high doses of folic acid may also increase the risk of certain types of cancer in some people. For now, aim to obtain your daily intake of folate from a wide variety of foods, not just by relying on fortified foods. Food sources of folate tend to be high in other desirable phytonutrients that are powerful antioxidants, and it is unlikely that you would overdose on folate from naturally occurring sources.

In the United States, the daily value for folate is 400 mcg, which is the same level as the DRI for adults. The % daily value gives you an idea of how much folic acid is in the food you eat. However, the % daily value number is only required by the FDA for foods that have been fortified with folic acid, so it is unlikely you would see food labels on fresh vegetables or fruits that display this information.

The number you see on the Nutrition Facts label is a percentage calculated by dividing the amount of folic acid in one serving of the food by the daily value. To use an example from the food table above, a cup of Cheerios that contains 336 mcg of folic acid would have 84% of the daily value (DV) for folic acid.

Vitamin B12: Mega doses of folate may mask Vitamin B12 deficiency.