Many parents have been warned not to feed certain foods to their babies due to nitrates, but recommendations are often conflicting. As a result, parents are left confused and wondering: what are nitrates, what’s the concern, and is there really reason to worry?

Nitrates are chemicals that are naturally present in plants and soil. A vegetable’s nitrate level depends on factors such as vegetable type, age of plant, growing temperature, sunlight exposure, soil moisture and composition, and amount of nitrate-containing fertilizer used. 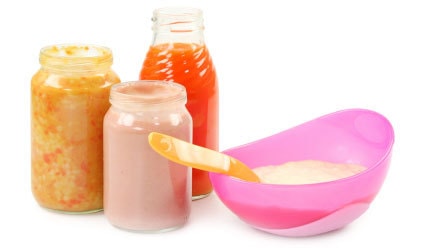 What are the Health Concerns About Nitrates?

Nitrates themselves are not harmful – the problem happens when nitrates are converted to nitrites by bacteria in a baby’s gastrointestinal tract. Nitrites interfere with the transportation of oxygen by red blood cells, which can result in cyanosis and a serious condition known as “blue baby syndrome.” Infants less than three months old are particularly susceptible. However, this condition is extremely rare and usually related to contaminated well water, not food.

The good news: when an infant is around three months old, his stomach begins to produce more hydrochloric acid, which destroys most of the nitrate-converting bacteria. By six months, a baby’s digestive system is more fully developed and even better at fighting these bacteria. This is one reason it is critical to wait until closer to six months to introduce solid foods to babies.

Leafy green and root vegetables are highest in nitrates. The top three are:

Organic vegetables are usually lower in nitrates because they haven’t been exposed to nitrate-containing fertilizers. Therefore, it is best to purchase organic versions of these vegetables for your baby.

Statement by the American Academy of Pediatrics

In 2005, the American Academy of Pediatrics stated that “because the intake of naturally occurring nitrates from foods such as green beans, carrots, squash, spinach, and beets can be as high as or higher than that from well water, these foods should be avoided before three months of age.”

The report also suggested that “some commercially prepared infant food vegetables are voluntarily monitored for nitrate content by private industry, including spinach, squash, and carrots.” They add that, “Infants fed commercially prepared infant foods after three months of age generally are not at risk of nitrate poisoning, although the containers should be refrigerated after first use and discarded within twenty-four hours of opening.”

If you worry about commercial jarred foods, you may also make wholesome homemade baby food yourself, but note that improper storage can increase the risk of poisoning. So when preparing vegetables that tend to be high in nitrates:

Don’t avoid serving healthy vegetables to your baby in fear of nitrate exposure. As long as you wait until your baby is at least six months old (eight months for spinach), there is essentially no risk of harm. To be even safer, purchase organic and store carefully.

1 thought on “Nitrates and Baby Foods”