Ever wonder what food companies put in their chicken nuggets? A quick browse through the ingredient list reveals some mysterious descriptions, such as “mechanically separated chicken meat,” as well as trans fat sources such as vegetable oil shortening and partially hydrogenated vegetable oil. In addition, many of the products are loaded with salt and come pre-fried, bumping up the sodium and fat content unnecessarily. 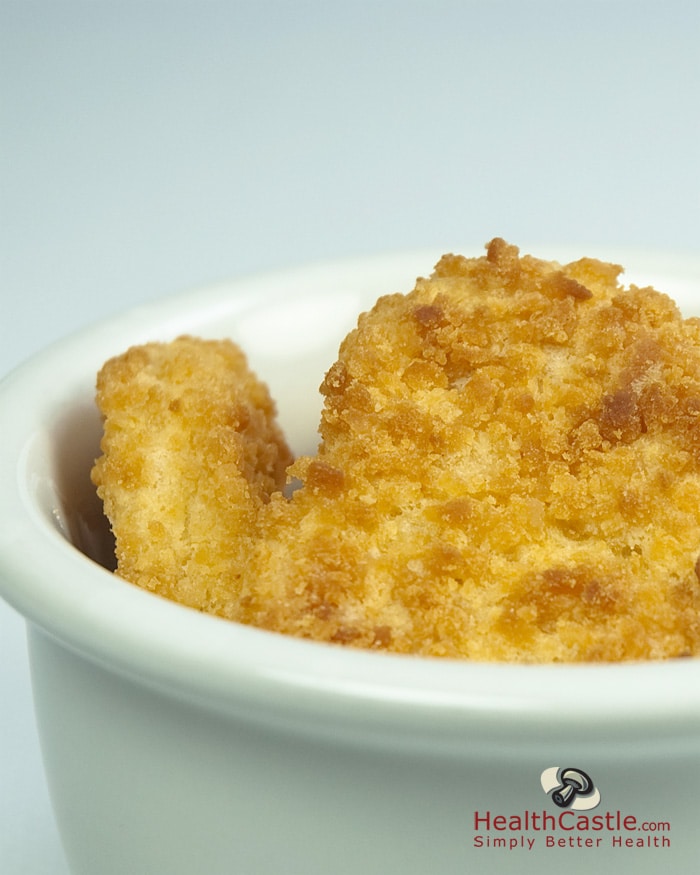 We set out to make our own chicken nuggets from scratch and compared them to a store-bought frozen variety. Here is what we found:

Price-wise, our homemade version costs twice as much as the frozen variety. However, our version also contains twice as much chicken meat per serving, as shown in the amount of protein per serving. The main differences nutritionally were:

There was also a very noticeable difference in taste and texture. The frozen pre-made variety was excessively salty, and had an overly chewy texture (because it’s made with a mixture of chicken and other fillers). The homemade variety was tender and kept moist by the buttermilk soak.

The biggest advantage to making your own chicken fingers or nuggets, of course, is that you are using real chicken, not an engineered chicken-like product. Chicken nuggets or chicken fingers are popular staples for kids, because they are easy to eat and have a mild taste that appeals to most. Fortunately, chicken nuggets are quite easy to make from scratch. If chicken nuggets are a regular meal fixture in your household, consider the amount of trans fat, salt, and total fat you are keeping out of your family’s collective cardiovascular systems by making your own!

The original recipe is courtesy of The Food You Crave by Ellie Krieger (p. 200 – Crispy Chicken Fingers). The recipe comes with a honey-mustard dipping sauce (not included here).

Preheat the oven to 400F.Combine the chicken and buttermilk in a shallow dish, turning the chicken to coat it with the buttermilk. Cover and chill for 15 minutes. Coat two baking sheets with cooking spray.Put the cereal in a sealable plastic bag and crush with a rolling pin. Transfer the crumbs to a shallow dish and season them with the salt and pepper. Dip each piece of chicken in the cereal to fully coat and arrange on the prepared baking sheets. Bake until cooked through, about 8 minutes. Leave the chicken on the baking sheets to cool slightly. It will become crispier.