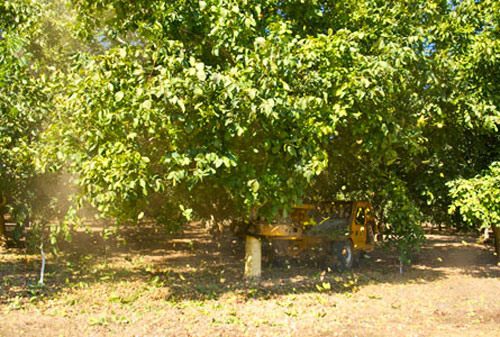 Ever Wonder How Walnuts Become a Food Ingredient? Let’s Follow a Typical Walnut from Orchard to Table

When you think of the autumn harvest, walnuts may not be the first food you associate with this unique time of year. You may, however, think of shelled walnuts as a festive comfort food for snacking, nestled alongside their cousins Brazil nuts, almonds, and hazelnuts in a wooden bowl equipped with a nutcracker and picks. Well, those walnuts are in fact part of the autumn harvest: They are typically harvested from late summer to November from more than 200,000 acres of orchards throughout the California Central Valley. The walnuts follow a rather extensive journey from these orchards that are home to nearly 50 walnut tree varieties to end up in the form of an ingredient on our kitchen tables.

Shakers, sweepers, and pickers make up the first leg of a walnut’s journey from orchard to kitchen table. The first machine the walnuts enounter while still in their natural in-shell state loosely encased in an outer green husk is called a shaker, which essentially shakes the walnuts from the trees to the ground. The circular motion of the sweeper, similar to a street sweeper, collects the fallen walnuts, sweeping them into rows to allow the mechanical picker to pick them up for cleaning.

After harvesting, the walnuts continue on to the cleaning process, which begins with the removal of the protective outer green husk. The still-in-shell walnuts go through an air-drying process necessary to bring the nuts to an optimal moisture level and in turn protect their quality during storage.

The journey of walnuts continues to the packing plant, where they are prepared for two markets, in-shell and shelled nuts. In-shell walnuts are sized according to USDA standards and packaged, while shelled walnuts are mechanically cracked, screened, and sorted according to size and color and packaged after being hand-sorted and physically inspected and certified for quality.

California walnuts represent 99% of the commercial U.S. supply and account for 3/4 of the world trade. Nearly 62% of walnut exports are shelled and 38% are exported in-shell. Approximately 95% of shipments in the U.S. market are shelled walnuts.

Shelled walnuts may be stored in a sealed container in a cool, dry place out of direct sunlight. Cold storage is an ideal storage option and unopened store-bought shelled walnut packages may be kept in the refrigerator for up to a year, while opened packages can be stores in the fridge up to six months. In-shell walnuts are also best stored in a cool, dry place away from sunlight or in the refrigerator or freezer.

Walnuts lead the nut category with the highest content of the omega-3 fatty acid alpha-linolenic acid, and although in-shell walnuts go through fewer processing steps, this does not appear to influence the walnuts’ nutrition facts. In-shell walnuts are believed by some to aid in dieting efforts when compared to shelled walnuts because of the extra effort needed to shell each nut, which may lead to less snacking.