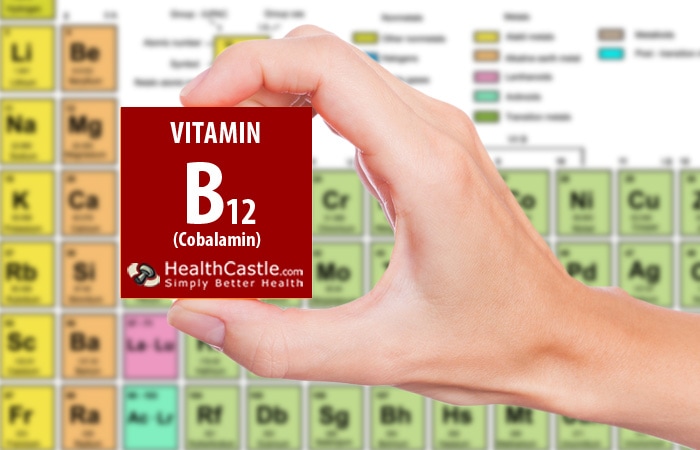 Vitamin B12 is one of eight B vitamins. All of the B vitamins are water soluble, meaning that the body does not store them but excretes them in the urine. Vitamin B12 is also known as cyanocobalamin and cobalamin.

The Dietary Reference Intakes (DRI) for Vitamin B12 are shown below:

Because Vitamin B12 is water soluble, excessive intake of foods that contain Vitamin B12 has not shown to be toxic to humans.

Because 10 to 30% of elderly people may malabsorb food-bound B12, it is advisable for those older than 50 years to meet their recommendation mainly by consuming foods fortified with B12 or a supplement containing B12.

Like the other B vitamins, Vitamin B12’s main role is to help your body use carbohydrates, protein, and fat to make energy. Your body needs it to form adenosine triphosphate (ATP), which every cell of the body uses for energy. B-complex vitamins are also needed for healthy skin, hair, eyes, and liver.

Vitamin B12 is especially important for maintaining healthy nerve cells. The myelin sheath, a coating that surrounds the nerves, does not form properly when B12 is deficient. Research is being conducted around supplementation of B12 and its ability to be an effective pain and symptom reliever for a variety of nervous system disorders.

Vitamin B12 helps in the production of the body’s genetic material, DNA and RNA. DNA provides information to red blood cells as they mature. Without B12, synthesis of DNA becomes defective and, in turn, so does the information needed for red blood cell formation. The blood cells become too large and poorly shaped and lose their ability to function effectively, a condition known as pernicious anemia. However, the most common cause of pernicious anemia is a lack of intrinsic factor, a protein made in the stomach that is required for the absorption of B12.

It is not uncommon for elderly people to be mildly deficient in Vitamin B12. They have less stomach acid and therefore less intrinsic factor. Low levels of B12 can cause a range of symptoms, including diarrhea, nervousness, fatigue, shortness of breath, numbness, or a tingling sensation in the fingers and toes. Severe deficiency of B12 causes nerve damage.

Other groups of individuals may also be at risk for B12 deficiency anemia. Vegans and some vegetarians are at risk because Vitamin B12 is found mainly in animal foods. These individuals may want to consider a supplement and/or products that have been fortified with B12, such as ready-to-eat breakfast cereals. Additionally, people with problems absorbing nutrients because of conditions such as Crohn’s disease, pancreatic disease, and some gastrointestinal surgeries may be at risk for deficiency. Those at risk also include individuals infected with Helicobacter pylori (H. pylori), an organism in the intestines that can cause an ulcer. H. pylori damages stomach cells that make intrinsic factor. People with eating disorders and those with HIV are also prone to deficiency.

Vitamin B12 is found only in animal foods and fortified foods. The best sources of Vitamin B12 include eggs, milk, cheese, milk products, meat, fish, shellfish, and poultry. Some soy and rice beverages and soy-based meat substitutes are fortified with Vitamin B12.

Folate: Vitamin B12 activates the metabolically active form of folate.

Potassium: In some individuals, potassium supplements can reduce absorption of Vitamin B12, possibly contributing to Vitamin B12 deficiency.

Herbal Supplements and Prescription Drugs: Interactions to Watch Out For