5 Foods You Should Eat More Of After 50 When discussing the topic of healthy eating after 50, calcium often comes up. Yes! We should be eating more calcium-rich foods. Calcium has already been talked about many times – maybe too many times! So, other than calcium, what nutrients and foods should we eat more of after 50 years of age? 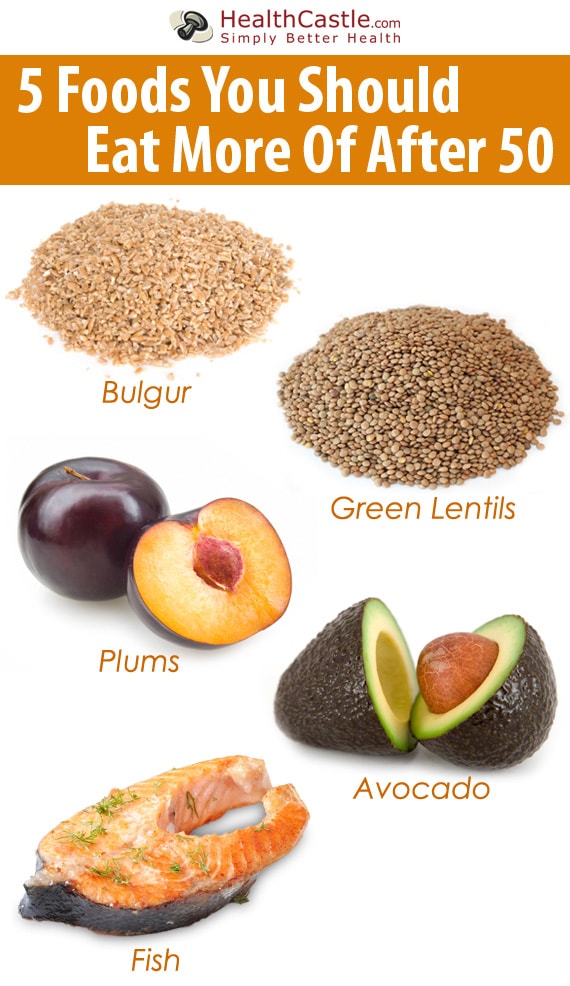 5 Foods You Should Eat More Of After 50

Lentils are simply a nutrition powerhouse! Just a cup of cooked lentils provides more than 15 grams of total fiber. That’s 62% of the daily value of fiber you need! In addition to their high fiber content, lentils also have high potassium content. Potassium is a mineral that counteracts what sodium does to the body. In other words, potassium helps lower blood pressure! The wonderful properties of lentils don’t stop here. Lentils are very low on the glycemic index, even lower than beans, making them a staple for folks with Type 2 diabetes.

Fish is the only food source that provides marine-based omega-3 in the form of DHA and EPA. Both these essential fatty acids are important for lowering blood cholesterol – particularly triglycerides. Furthermore, DHA plays a critical role in brain function maintenance and hence assists in preventing Alzheimer’s Disease. In addition, all fish has fewer fat and calories per ounce than other meats, like chicken and beef, making fish a waistline-friendly food. In general, just two servings of fish per week can help you reach your DHA requirement.  If you are a vegetarian, you may consider taking an algae-based DHA supplement.

Bananas are often regarded as a high-potassium food. But half an avocado actually has more potassium than a whole banana! Plus, avocado is a good source of heart-friendly monounsaturated fatty acids, the same fat found in olive oil. So take advantage of avocado’s natural fat content, and use it as a dip, spread, and more.

Plums are not on this list just because they can be dried into prunes! Instead, I chose plums because of their purple color. The whole purple-color group collectively has the highest antioxidant level of all the colors. So enjoy your plums, blueberries, blackberries, concord grapes, and more!

Researchers from the Columbia University followed more than 2,000 seniors from New York for 4 years. The data from their food frequency questionnaire as well as incidence of Alzheimer’s disease were analyzed. Results showed that those who consumed a diet closely resembling the Mediterranean diet had a 40 percent lower risk of Alzheimer’s than those who adhered the least to the diet. The results were published online in the Annals of Neurology on April 18, 2006.

The Mediterranean Diet was made famous by an European study published in the New England Journal of Medicine in 2003. Researchers followed more than 22,000 people living in Greece and investigated their eating habits. During the 4 years of the study, researchers found that the closer people followed the Mediterranean diet, the less likely they were to die from either heart disease or cancer.

The Mediterranean diet is not really a set diet. It is simply a healthy eating pattern – a pattern close to the dietary guidelines recommended by the American Heart Association. This diet is high in the good fats (monounsaturated and polyunsaturated fats) as present in fish, olive oil and nuts and low in saturated fats and trans fats. It provides an excellent source of fiber and antioxidants due to the variety of plant-based foods.

It is still too early to conclude that the Mediterranean Diet is effective as a preventative measure for Alzheimer’s disease. However, it certainly does not hurt to follow this heart-healthy diet!

Good health after 50 is usually a result of a healthy diet and lifestyle maintained when you’re younger. But it is never too late to start!