A bowl of hot oatmeal for breakfast is not only satisfying and filling, it also gets you off to a great start because of its numerous health benefits. Oats are a type of cereal grain that has been cultivated for over two thousand years, and has numerous uses in food. They are most commonly made into oatmeal, which can then be eaten as porridge or added to baked goods, or ground into oat flour and incorporated in baking. As one of the gluten-free grains, oats can be safely tolerated by those who must avoid gluten in their diet. 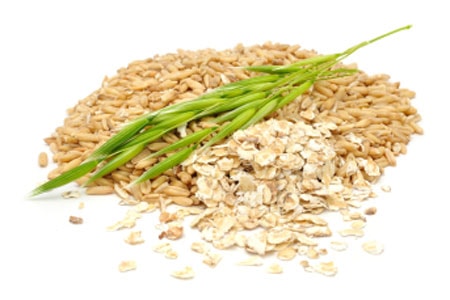 There’s no doubt that the look of oats is unglamorous, but fortunately most of us are aware that oats benefit us in a multitude of ways. Besides being a good source of high quality plant-based protein,Vitamin E, zinc, selenium, copper, iron, manganese and magnesium, oats are perhaps most well known for their high fiber content (when the whole grain, including the oat bran, is eaten). The soluble fiber in oats, beta-glucan, has been shown to reduce LDL cholesterol and help stabilize blood sugar. Harvard researchers who conducted the Physicians’ Health Study found that men who ate a bowl of whole grain cereal (such as whole oatmeal) daily had a 29% lower risk of heart failure. In addition, the phytochemicals in oat, such as avenanthramides (a type of antioxidant), has been shown by Tufts University researchers to help prevent free radicals from damaging LDL cholesterol, thus reducing the risk of cardiovascular disesase.

Various forms of oats are available on the market, and here is a crash course on oat vocabulary:

According to PepsiCo dietitian, Lindsey Toth, MS, RD, although there is no difference in soluble fiber content between old-fashioned, quick-cooking, and steel-cut oatmeal, the same cannot be said for the various types of instant oatmeal. Depending on whether whole grain oats are used as the main ingredient, and whether the manufacturer decides to add extra fiber to the instant oatmeal package, the fiber (and soluble fiber) content may differ. Always refer to the nutrition label to ensure you are buying healthy and wholesome oatmeal.

Ways to Include More Oat in Your Diet