If you have never eaten artichokes before, their intricate outer appearance can look intimidating. Once you tried them, though, you will find them a lot of fun to eat and downright delicious. Although they are considered by most to be a vegetable, they are actually flower buds. The artichoke is a big thistle plant that was first developed in Sicily, and is at the heart of Mediterranean cooking. There are several types of artichokes available, including green or purple regular artichokes and baby artichokes. Baby artichokes are actually fully mature artichokes that grow closer to the ground, sheltered by the larger leaves on the plant. Unlike regular artichokes, which have a fuzzy, inedible portion called the “choke,” the entire baby artichoke is fully edible. Artichokes can be found year-round, but they are at their prime between March and May. Responsible for 80% of all artichokes sold in the United States, Castorville, CA is known as the “Artichoke Capital of the World”. It is also where Marilyn Monroe was crowned “Miss California Artichoke Queen” in 1947. 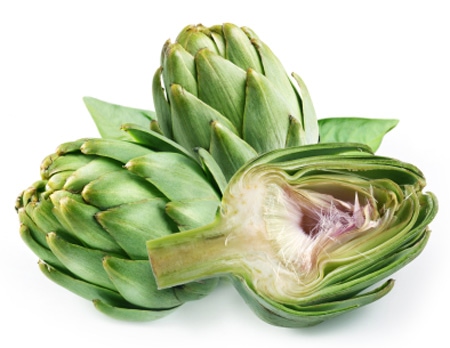 Not only are artichokes fun to eat, they are also very nutritious. They are rich in potassium, Vitamin C, folate, and fiber, and they are also a great source of antioxidants. Inulin, which is a prebiotic, also naturally occurs in artichokes. The Oxygen Radical Absorbance Capacity (ORAC) score of 1 medium artichoke is 8514, which is higher than a glass of red wine (ORAC 5693) or half a cup of pomegranate juice (ORAC 5853). Since artichokes also contain cynarin, some people believe that they can help lower cholesterol and protect liver cells, but studies to date have not been able to consistently demonstrate a benefit.

When choosing artichokes, be sure to look for those that are darker colored and heavy with “tight” leaves. If they look brownish or dry, or if the leaves are “open,” they may be past their prime. You can purchase them fresh and then freeze them at home (cooked, not raw), or you may also find them in cans or jars. However, do be aware of the higher sodium content of canned or jarred artichokes, as they are often preserved in a salted marinade.

Ways to Include More Artichokes in Your Diet

Artichokes are best enjoyed whole, freshly cooked. You may boil, steam, or microwave the whole artichoke, and enjoy it by peeling and dragging each leaf between your teeth to reach the edible portion. When you are done with all the leaves and approach the centre, you can spoon out and discard the fuzzy choke portion and the delicious “heart” will remain.

To incorporate artichokes into your everyday dishes, such as dips, salads, soups, and sandwiches, follow these basic preparation methods as outlined by the California Artichoke Advisory Board for the different parts of the artichoke: