If you have been diagnosed with diabetes or pre-diabetes, you probably spend a lot of time thinking about your blood sugar. What you may not know is that you can help to regulate your blood sugar naturally by including certain foods in your diet. Let’s take a look at six foods that can help you do just that. 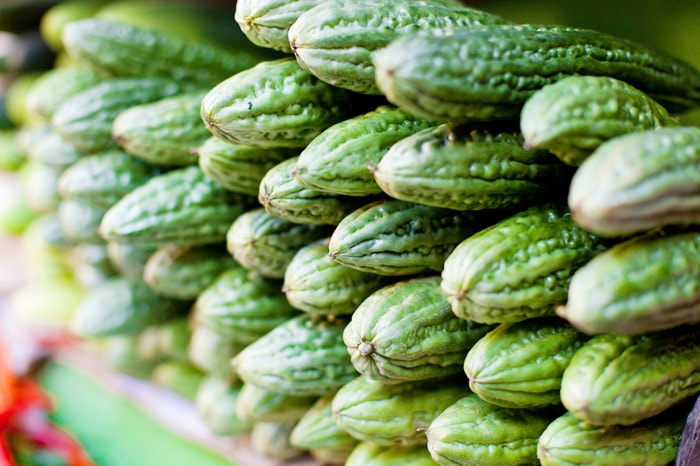 Bitter melon is commonly used as both a food and a medicine in some Asian cultures. In North America, you can buy bitter melon fresh, canned, in a tea, or as a supplement. This bitter-tasting but safe-to-eat fruit can activate an enzyme that may lower blood sugar by moving it from the blood into your body’s cells, where it can be used for energy. Because of its bitter taste, this melon is best served cooked with spices or other vegetables.

Scientific findings on cinnamon‘s ability to help regulate blood sugar have been mixed. A 2003 study published in Diabetes Care found that taking 1 g of cinnamon for 40 days helped to improve fasting blood glucose. Other studies have had conflicting results. What we know for sure is that cinnamon can help you use less sugar in your cooking (or even in your coffee!) because it adds flavor naturally. It’s also packed with antioxidants.

Several studies have now confirmed that a diet rich in whole grains can lower the risk of diabetes and help improve fasting blood sugar. The current U.S. Dietary Guidelines recommend three to five servings of whole grains per day for adults. Barley, particularly rich in beta-glucan, is a whole grain that’s been used as both food and a medicine for thousands of years. Barley is a great addition to soups and stews, or for a unique take on this whole grain, try adding cooked, chilled barley to salads.

Oats also contain the soluble fiber beta-glucan, which has been shown to help stabilize blood sugar. Oats offer additional benefits for those with diabetes or pre-diabetes in that they also reduce LDL cholesterol and help control body weight. A serving of oatmeal in the morning is an easy way to incorporate oats into your diet and get your day off to a healthy start. (Avoid instant oatmeal, as the way it’s processed can reduce the health benefits – plus it may contain added sugar.)

Onion is the best food source of chromium, which is an important mineral for blood sugar management. Chromium helps the body produce glucose tolerance factor (GTF), which insulin requires to help sugar move from the blood into the body’s cells to be used as energy.

Spinach is a magnesium-rich vegetable that can help control blood sugar levels by regulating insulin secretion as well as body’s use of glucose. Coincidentally, people with type 2 diabetes often have low levels of serum magnesium. Of course, spinach is also packed with other important nutrients, including beta-carotene, lutein, folate, Vitamin K, magnesium, manganese, calcium, and potassium.

Blood sugar regulation is very important for those with diabetes or pre-diabetes. These six foods can help keep your blood sugar levels in check.