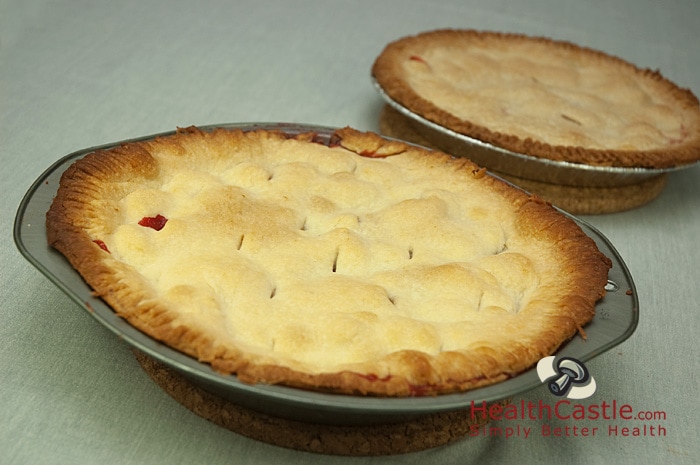 With the holidays approaching, many cooks are gearing up for holiday feasts. Often on the menu is a dessert that makes use of a pie shell. Although it seems very convenient to buy a pre-made pie crust that you can simply pile fillings on, these pre-made crusts often contain extra mystery ingredients you would not find in a homemade recipe, such as modified milk ingredients, tricalcium phosphate, and soybean lecithin. Homemade pie crusts won’t save you any fat or calories over the frozen version, but you’ll know exactly what has gone into your pie shell, and you’ll end up with a tastier, flakier pie crust. Here is a comparison between a store-bought frozen pie crust and a homemade version:

The homemade recipe yielded a much thicker and flakier pie crust, and our pie plate was slightly bigger than the frozen pie shell. This resulted in the higher fat and consequently calorie count for the homemade version. The frozen pie shell was flimsy, and was a torn-up, soggy mess when we tried to cut out a portion of the finished pie. The homemade shell stayed dry and flaky despite the juicy fruit filling, and we easily removed an intact slice complete with the filling. Our version also cost less per serving than the pre-made pie shell.

Whether store-bought or homemade, pie crust is a higher-fat product to be enjoyed only on special occasions. Our goal in making it from scratch is to show you that it is a fairly simple thing to do with a bit of pre-planning. Plus, by skipping the frozen pre-made product, you will cut out food additives from your featured pie for the holidays! In the pre-made pie crust for example, the additive “modified milk ingredients” could be an unpleasant and unexpected surprise for guests with milk allergy.

The homemade pie crust recipe is courtesy of Pim Techamuanvivit’s new book The Foodie Handbook. The recipe yields two 10-inch pie shells, so we had a little bit of leftover dough due to our smaller pie plate. We used a basic homemade fruit filling (made with fresh strawberries, sugar, cinnamon, and flour) for the purposes of the photo but, since it was the same for both pies, did not include the nutritional value of this in our analysis.

For the pie crust

Dining Out with Diabetes: Japanese Restaurants