You’ve probably heard a lot about how good for you whole grains can be. But do you really know what whole grains are – or why they’re so beneficial?

A grain is considered whole when all three parts – bran, germ and endosperm – are present. Most people know that fruits and vegetables contain beneficial phytochemicals and antioxidants, but many do not realize that whole grains are often an even better source of these key nutrients. In fact, whole grains are a good source of B vitamins, Vitamin E, magnesium, iron and fiber, as well as other valuable antioxidants not found in some fruits and vegetables. Most of the antioxidants and vitaminsare found in the germ and the bran of a grain. 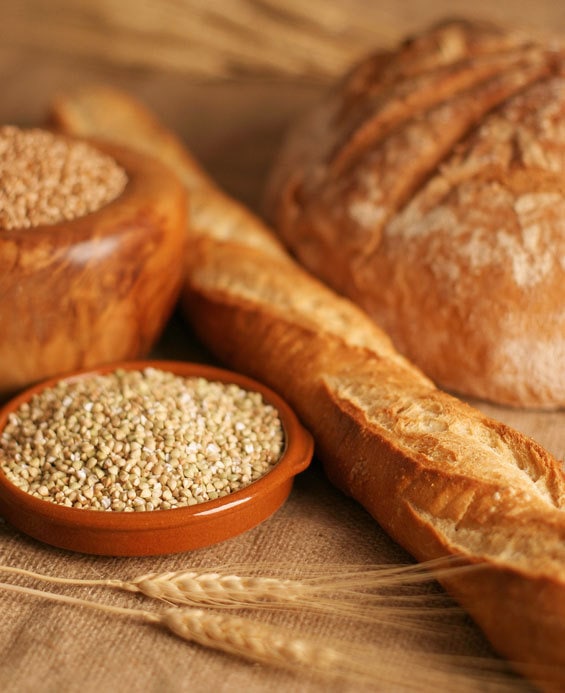 Whole grains have been shown to reduce the risk of heart disease by decreasing cholesterol levels, blood pressure, and blood coagulation. Whole grains have also been found to reduce the risks of many types of cancer. They may also help regulate blood glucose in people living with diabetes. Other studies have also shown that people who consume more whole grains consistently weigh less than those who consumed less whole grain products.

In January 2005, the US government published the new Dietary Guidelines for Americans 2005. One of the new guidelines recommends that all adults eat half their grains as whole grains – that’s at least 3 servings of whole grains a day.

Check labels carefully! Foods labelled with the words “multi-grain,” “stone-ground,” “100% wheat,” “cracked wheat,” “seven-grain,” or “bran” are usually not whole-grain products. Color is also not an indication of a whole grain. Brown does not necessary mean whole wheat or whole grain! Some brown bread has brown coloring added to achieve the brown color!

Researchers from the Harvard School of Public Health investigated the diet records and blood samples of nearly 1,000 healthy middle-aged adults. They measured levels of insulin and hemoglobin A1C as well as homocysteine and cholesterol levels. Data showed a lower risk of diabetes and heart disease in people eating a diet high in whole grains. The results were published in the American Journal of Clinical Nutrition on February 1, 2006.

Editor’s Note – A Trail of evidence on benefits of Whole Grains!

Just a month ago published in the same medical journal, another group of researchers from the Tufts University released a similar finding. Scientists found that as whole grain intake increased in older adults, fasting blood sugar levels and body mass index (BMI) were lower. Results also showed that people who consumed a high intake of refined grains had twice the risk of having diabetes and heart disease than those people who consumed the least refined grains.

Prior to these two recent studies, a few large-scale trials have already been published with the same findings. For instance, the Health Professionals Follow-up Study of 43,000 male health professionals published in September 2002 found that those who consumed the most whole grains were 42 percent less likely to develop diabetes. Another study involving 4,300 middle-aged Finns published in March 2003 found that people eating highest amounts of whole grains were 35 percent less likely to develop diabetes.cientists don’t know exactly which nutrients in whole grains prevent diabetes, but they generally recommended eating 3 servings daily based on the results of their studies. This recommendation is consistent with the Dietary Guidelines for Americans 2005 which recommends that all adults eat half their grains as whole grains – that’s at least 3 servings of whole grains a day. For more information about whole grains and ways to include whole grains in your diet, please read our Whole Grains Guide.