This just in: The “Freshman 15” is really not an urban legend.

Cornell University researchers recently confirmed what many of us have long suspected (or anecdotally observed): many freshmen do gain weight during their first year at university. The average weight gain reported was 4 pounds in the first semester. While that may not seem like a lot initially, it can be significant if it continues throughout the first year of school!

While it does take some planning and organizing to avoid those pounds creeping on, the Freshman 15 does not have to be inevitable. Here are some surefire ways to help you avoid the Freshman 15. 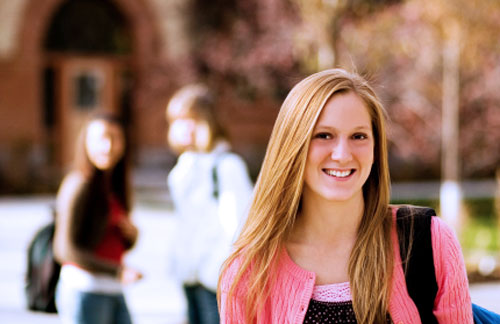 5 Easy Steps to Beating the Freshman 15

Why eat breakfast? Well, while you’ve been sleeping all night, your body’s been burning through the calories you consumed the day before, leaving your blood sugar – the fuel for your body and brain – low. When you eat breakfast, you are refueling – so that your body has the energy supply it needs to get going, and your brain has the fuel it needs to think clearly.

Skipping breakfast altogether will likely lead to late-morning hunger pangs that may have you reaching for an enormous cinnamon bun or doughnut at the cafeteria, or the candy bar in the vending machine as you rush from class to class. Treat breakfast like a meal that’s just as important as lunch or dinner, and invest some time in preparing something in advance for yourself. When you eat breakfast, you are more likely to eat well for the rest of the day.

Since we all made it through college (and a few all-nighters) ourselves, we remember how hunger can strike hard at 2 or 3 in the morning, just as you’re finishing up the fourth draft of your mid-term paper. Be smart and plan ahead by stocking your pantry (or even your desk drawer) with healthy snack choices. You certainly don’t want to get into the habit of eating late at night and going to bed on a full stomach. But on the nights when your body is telling you that you really must have something, the healthy choices close at hand will put you a step ahead of those who call for pizza or take-out greasy foods.

Before you show up extra thirsty to the next keg party, consider this: alcohol has more calories per gram than carbohydrate or protein. The average 12-oz can of beer contains 150 calories. Since you are likely going to drink more than one can at a party, you can easily get way too many calories without even eating any food!

Forego sugary drinks like sodas or frothy coffee concoctions. You can consume a lot of calories by drinking sweet beverages without even noticing. A can of soda has 10 to 11 teaspoons of sugar in it – and that adds up to a lot of empty calories that don’t contribute any nutrients. To top it off, sodas and coffee also have caffeine, which can dehydrate you quickly.

Many of us start skipping exercise when the demands of academic life become too intense. Instead, schedule 30 minutes of aerobic activity into your day. If you are easily bored, try doing different things on different days. Take a power walk around campus during your break, or check out what classes are offered at the university gym. Not only is exercise good for your body, it also refreshes your brain and gives you a welcome break from the often-sedentary routine of reading, studying, and writing papers.